The Lutheran Church was created on the basis of giving the people a larger role in worship. By Increasing the use of vernacular language, services were easier to understand and songs were able to be sung by the congregation. Luther's music contained Catholic polyphonic music and chants in both the original latin text and in the vernacular. As a composer and musician, Luther made music play a very important role in his church. He strongly believed in the "Educational and ethical power of music," so singing became an activity that was shared by the entire group, rather than just the choir. The most important form of music in the Lutheran Church was the Lutheran chorale. During each service, the congregation would sing several of these chorales. They "[Fulfilled] Liu, Kevin, Luther's aim in increasing the worshipper's participation through music." These chorales contained a strophic poem and had simple melodies and rhythms and were to be sung in unison without harmony or accompaniment. These pieces were designed to be simple enough to be easily learned and sung by a congregation that had no background in music education. There were four main sources from chorales, which were: adaptations of Gregorian chant, existing german songs, secular songs given new words, and brand new compositions.

Catholic music, however, was quite different. Only those who were musically trained could partake in musical performance. Some pieces contained instrumental support, while others were sung a cappella with polyphonic texture. They contained no use of the vernacular and were only sung in Latin. The main difference between Lutheran and Catholic music was that they were designed to be digested by the audience in different ways. Lutheran music was to but sung as a congregation, while Catholic music was to be only heard and worshipped. Martin Luther's composition Nun komm, der Heiden Heiland is the classic Lutheran Chorale. It contains a simple monophonic melody with only one line, a short, rhyming poem in strophic form in the vernacular text, and totally metrical. These features make it easier for a "mixed congregation of men and women" to sing, even if they do not have any education in music. In conclusion, Martin Luther's music was simple. Melodies were short and easy to learn and words were rhymed and put into a strophic form. This was so that anyone could easily learn the music, thus making congregational singing more realistic, as it played an important role in Luther's ideologies.

I hope you found some of this interesting! It is fascinating to see how many hymns in our hymnal are composed by Luther. Each time we sing a hymn from the hymnal, look at the bottom of the page and it will tell you who composed the hymn melody or wrote the lyrics. 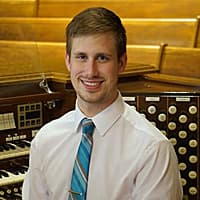