The reredos behind the altar depicts the Holy Trinity. The Father, The Son and The Holy Spirit.  It was was created by Lambrecht Glass Studio of Omaha, NE, and installed October 2004. 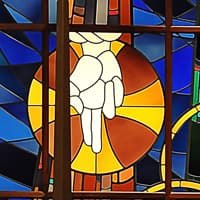 The Father- Icon on the top left, The Hand of God is surrounded by a cruciform nimbus, denoting not only the Father’s holiness but also His great love in giving us His Son and sending Him to the cross for our salvation. The symbol of the hand of God reminds us that the Heavenly Father’s hand reaches out into our lives. It guides us, guards us, blesses us and supplies all our needs. "You open your hand and satisfy the desires of every living thing." (Psalm 145:16) 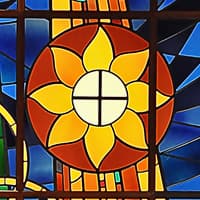 The Holy Spirit (or Holy Ghost)- One of the most common symbols of the Holy Spirit is a descending dove. It comes from the story of Jesus’ baptism, when Jesus saw “the Spirit, like a dove, descending upon him.”  (Mark 1:10)  In the Old Testament, it was a dove that signaled the end of the flood (Gen 8:8-12)

The Borromean Rings in the center of the reredos represent the Trinity.  There are many symbols of the Trinity in Christianity. The Borromean Rings are three interlocking circles that symbolize the Christian trinity. The word “trinity” comes from the Latin noun “Trinitas” meaning “three are one.”   In mathematics, the Borromean rings consist of three topological circles which are linked but where removing any one ring leaves the other two unconnected.  In the basis of the Holy Scriptures we teach the Holy Trinity is one true God, Deut. 6:4; 1 Cor. 8:4, is the Father and the Son and the Holy Ghost, three distinct persons, but of one and the same divine essence, equal in power, equal in eternity, equal in majesty, because each person possesses the one divine essence entire, Col. 2:9, Matt. 28:19.   "Therefore go and make disciples of all nations, baptizing them in the name of the Father and of the Son and of the Holy Spirit" (Matthew 28:19)

Stained Glass Work Throughout the Church 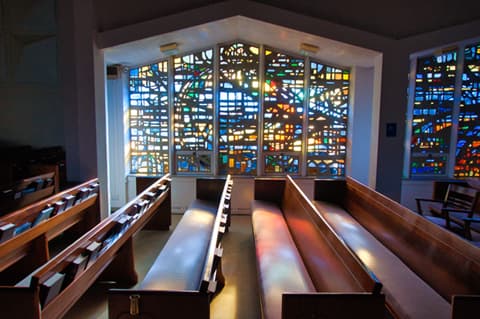 In September of 1968 the committee recommended Gabriel Loire be commissioned as the designer of the windows used in the sanctuary. The symbolism employed was simple but beautiful.

There is a progression of colors, darker at the entrance to the sanctuary and becoming progressively lighter as one moves forward to the chancel area.  Pacific (Hills) means "peaceful". As the worshipper enters the sanctuary — we do so with our hearts and conscience laden within and guilt. As we are in God's House and hear the Gospel message, our sins are removed and the guilt taken away by our faith in Jesus Christ. Thus from darkness to light.

The chancel window gives the appearance of the abstract cross in reds.  Other (reds) appear to be dripping blood to the base of the window, greens as to represent the earth.

These windows are not the typical stained glass type, set in lead. They  are faceted type glass, chunks of glass set in epoxy (concrete-like substance). They have a beauty all their own and the committee feels the challenge earlier described to have been accomplished. The committee thanks the Holy Spirit for His guidance and windows, and We, the congregation thank the committee for their efforts expended.

The joy of April 5 is to the Lord Who filled the heart of our anonymous donor to make these projects possible.  Continued blessings to our donor and to the use these additions make our worship of Father, Son and Holy Ghost.